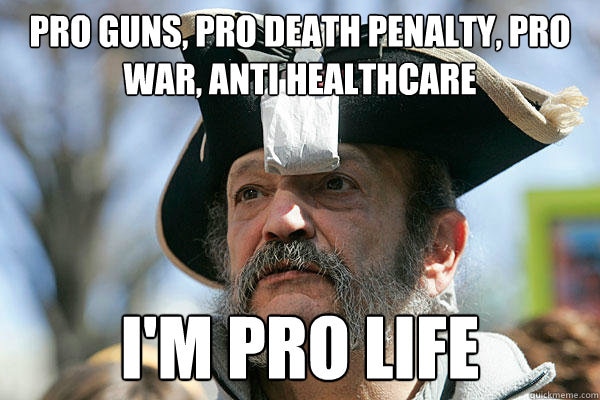 Anti life yet pro-life...
People talk about how abortion is ending a human life. You're terminating a pregnancy and not killing anyone, you're not allowing a fetus (Which you created in your body) to develop into a baby which you cannot for whatever reason care for or give birth to. It is a process which needs to be legal, and it's just another way of medically dealing with something which is taking place in your body and potentially harming you. Because if you make it completely illegal, this will only get worse, people will still find ways to get abortions, but it will be completely unsafe, unhealthy and just plain dangerous for the person. By making it legal it won't have to be dangerous in any way at all.

Murder is illegal, it is illegal because you are infringing upon another person's rights. A fetus, is however, not a person. Not within the first 20 weeks (In general, varies depending on the development). Making the choice of having an abortion IS taking responsibility.
​
For the people who say "What about unborn children's choices?" You guys don't really understand how it works. The unborn haven't developed the capacity to make choices. An embryo is a clump of cells. It's not a child. An embryo is a clump of undifferentiated cells. There are no neurons and so neural activity is impossible. No synapses, no nerve endings, if you could see it you would realize it, instead of insisting on something which you have no knowledge about at all.

Now, this is what actually got me started on abortion earlier in the video and i'm going to talk about it now. Here's a lovely quote recently said by ‎Angel Dilard, who is an anti-abortion activist in Kansas:

"Thousands of people will know your habits and routines. They know where you shop, who your friends are, what you drive, where you live. You will be checking under your car everyday, because maybe today is the day someone places an explosive under it" -Angel Dillard, anti-abortion activist.

But hey, these domestic terrorist wont be arrested for using these threats or anything, no, they are protected under the constitution and yet when people joke around threatening others in a purely joking way, they go straight to jail, while the actual domestic terrorist just walk on home, planning their next threat and or actual attack.
Because America. That's all there is to it.
​
Stuff on the quote Angel Dilard said:
http://www.motherjones.com/mojo/2012/08/jury-hear-allegations-against-kansas-anti-abortion-activist
http://www.msmagazine.com/news/uswirestory.asp?ID=13802