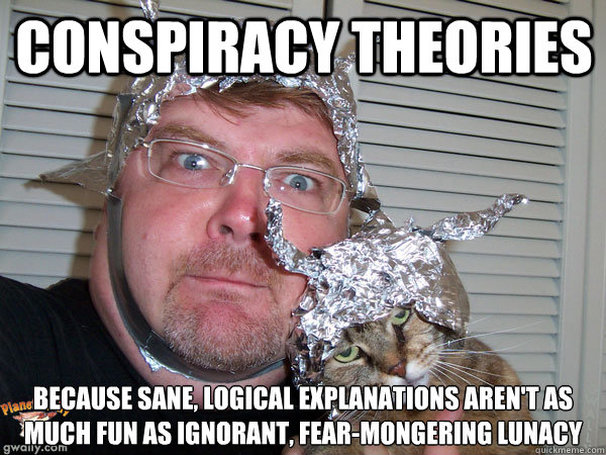 Pretty much everyone who is an Alex Jones fanboy
​I'm getting really annoyed with conspiracy theorist. This is to them.

You don't present facts. You present opinions, assumptions and baseless claims. When someone calls you out on it you spam whatever place your talking on with pictures of nonsense with no sources, things taken out of context or just misrepresenting the truth and complete deceitfulness, if not that, then either YouTube videos by people who have been shown to have psychotic breakdowns, who are mentally unstable and are highly misled or trying to mislead you, without presenting facts, reliable and verifiable sources or evidence other then their own words, words of other peoples with the exact same things or articles that agree with them. As well as articles which basically is the same thing; baseless assumptions, biased opinions, ignorant of reality, following people who have been known to be insane like David Icke and Alex Jones who present no facts other then "I'm right, you're wrong. You are all sheeple and you will see one day hopefully!" and then run away thinking they've somehow won. If not that then theyll just say that the people who don't think just like you are all in denial. We aren't.
It's been shown that people who tend to believe in many of these conspiracy theories tend to believe them because they want it to be true, they want to have a knowledge that others don't and you think that they are to "dumbed down" to "realize the truth", to have a sense of wishing they are being watched, that they are being followed, that there is some major conspiracy going on against them. To in a sense feel special then others.
Here is a lovely quote from  “Dead and Alive: Beliefs in Contradictory Conspiracy Theories".

Is it sort of strange that Alex jones in his movie 'Conspiracy Rising' said this?:
“No one is safe, do you understand that? Pure evil is running wild everywhere at the highest levels.”
Not really.....
​
Now, you guys can say that I am in denial all you want, it's not going to change a thing.