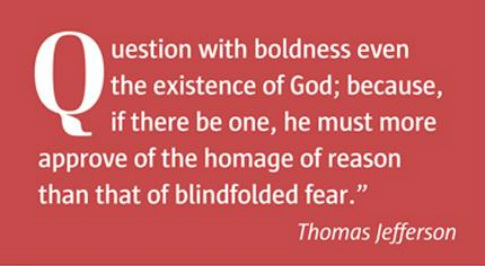 Millions of innocent men, women and children, since the introduction of Christianity, have been burnt, tortured, fined and imprisoned; yet we have not advanced one inch towards uniformity.
-Thomas Jefferson, Notes on Virginia, 1782

But it does me no injury for my neighbor to say there are twenty gods or no God. It neither picks my pocket nor breaks my leg
.-Thomas Jefferson, Notes on Virginia, 1782

What is it men cannot be made to believe!
-Thomas Jefferson to Richard Henry Lee, April 22, 1786. (on the British regarding America, but quoted here for its universal appeal.)

Question with boldness even the existence of a god; because if there be one he must approve of the homage of reason more than that of blindfolded fear.
-Thomas Jefferson, letter to Peter Carr, August 10, 1787

Where the preamble declares, that coercion is a departure from the plan of the holy author of our religion, an amendment was proposed by inserting "Jesus Christ," so that it would read "A departure from the plan of Jesus Christ, the holy author of our religion;" the insertion was rejected by the great majority, in proof that they meant to comprehend, within the mantle of its protection, the Jew and the Gentile, the Christian and Mohammedan, the Hindoo and Infidel of every denomination.
-Thomas Jefferson, Autobiography, in reference to the Virginia Act for Religious Freedom

I concur with you strictly in your opinion of the comparative merits of atheism and demonism, and really see nothing but the latter in the being worshipped by many who think themselves Christians.
-Thomas Jefferson, letter to Richard Price, Jan. 8, 1789 (Richard Price had written to TJ on Oct. 26. about the harm done by religion and wrote "Would not Society be better without Such religions? Is Atheism less pernicious than Demonism?")

I never submitted the whole system of my opinions to the creed of any party of men whatever in religion, in philosophy, in politics, or in anything else where I was capable of thinking for myself. Such an addiction is the last degradation of a free and moral agent.
-Thomas Jefferson, letter to Francis Hopkinson, March 13, 1789

They [the clergy] believe that any portion of power confided to me, will be exerted in opposition to their schemes. And they believe rightly; for I have sworn upon the altar of god, eternal hostility against every form of tyranny over the mind of man. But this is all they have to fear from me: and enough, too, in their opinion.
-Thomas Jefferson to Dr. Benjamin Rush, Sept. 23, 1800

Believing with you that religion is a matter which lies solely between man and his God, that he owes account to none other for his faith or his worship, that the legislative powers of government reach actions only, and not opinions, I contemplate with sovereign reverence that act of the whole American people which declared that their legislature should 'make no law respecting an establishment of religion, or prohibiting the free exercise thereof,' thus building a wall of separation between church and State.
-Thomas Jefferson, letter to Danbury Baptist Association, CT., Jan. 1, 1802


History, I believe, furnishes no example of a priest-ridden people maintaining a free civil government. This marks the lowest grade of ignorance of which their civil as well as religious leaders will always avail themselves for their own purposes.
-Thomas Jefferson to Alexander von Humboldt, Dec. 6, 1813.


The whole history of these books [the Gospels] is so defective and doubtful that it seems vain to attempt minute enquiry into it: and such tricks have been played with their text, and with the texts of other books relating to them, that we have a right, from that cause, to entertain much doubt what parts of them are genuine. In the New Testament there is internal evidence that parts of it have proceeded from an extraordinary man; and that other parts are of the fabric of very inferior minds. It is as easy to separate those parts, as to pick out diamonds from dunghills.
-Thomas Jefferson, letter to John Adams, January 24, 1814

Christianity neither is, nor ever was a part of the common law.
-Thomas Jefferson, letter to Dr. Thomas Cooper, February 10, 1814
​In every country and in every age, the priest has been hostile to liberty. He is always in alliance with the despot, abetting his abuses in return for protection to his own.
-Thomas Jefferson, letter to Horatio G. Spafford, March 17, 1814

If we did a good act merely from love of God and a belief that it is pleasing to Him, whence arises the morality of the Atheist? ...Their virtue, then, must have had some other foundation than the love of God.
-Thomas Jefferson, letter to Thomas Law, June 13, 1814

Ridicule is the only weapon which can be used against unintelligible propositions. Ideas must be distinct before reason can act upon them; and no man ever had a distinct idea of the trinity. It is the mere Abracadabra of the mountebanks calling themselves the priests of Jesus."
-Thomas Jefferson, letter to Francis Adrian Van der Kemp, 30 July, 1816

My opinion is that there would never have been an infidel, if there had never been a priest. The artificial structures they have built on the purest of all moral systems, for the purpose of deriving from it pence and power, revolts those who think for themselves, and who read in that system only what is really there.
-Thomas Jefferson, letter to Mrs. Samuel H. Smith, August, 6, 1816

As you say of yourself, I too am an Epicurian. I consider the genuine (not the imputed) doctrines of Epicurus as containing everything rational in moral philosophy which Greece and Rome have left us.
-Thomas Jefferson, letter to William Short, Oct. 31, 1819

Priests...dread the advance of science as witches do the approach of daylight and scowl on the fatal harbinger announcing the subversions of the duperies on which they live.
-Thomas Jefferson, Letter to Correa de Serra, April 11, 1820

Among the sayings and discourses imputed to him [Jesus] by his biographers, I find many passages of fine imagination, correct morality, and of the most lovely benevolence; and others again of so much ignorance, so much absurdity, so much untruth, charlatanism, and imposture, as to pronounce it impossible that such contradictions should have proceeded from the same being.
-Thomas Jefferson, letter to William Short, April 13, 1820

To talk of immaterial existences is to talk of nothings. To say that the human soul, angels, god, are immaterial, is to say they are nothings, or that there is no god, no angels, no soul. I cannot reason otherwise: but I believe I am supported in my creed of materialism by Locke, Tracy, and Stewart. At what age of the Christian church this heresy of immaterialism, this masked atheism, crept in, I do not know. But heresy it certainly is.
-Thomas Jefferson, letter to John Adams, Aug. 15, 1820

Man once surrendering his reason, has no remaining guard against absurdities the most monstrous, and like a ship without rudder, is the sport of every wind.
-Thomas Jefferson to James Smith, 1822.

I can never join Calvin in addressing his god. He was indeed an Atheist, which I can never be; or rather his religion was Daemonism. If ever man worshipped a false god, he did.
-Thomas Jefferson, letter to John Adams, April 11, 1823

And the day will come when the mystical generation of Jesus, by the supreme being as his father in the womb of a virgin will be classed with the fable of the generation of Minerve in the brain of Jupiter. But may we hope that the dawn of reason and freedom of thought in these United States will do away with this artificial scaffolding, and restore to us the primitive and genuine doctrines of this most venerated reformer of human errors.
-Thomas Jefferson, Letter to John Adams, April 11, 1823

It is between fifty and sixty years since I read it [the Apocalypse], and I then considered it merely the ravings of a maniac, no more worthy nor capable of explanation than the incoherences of our own nightly dreams.
-Thomas Jefferson, letter to General Alexander Smyth, Jan. 17, 1825

May it be to the world, what I believe it will be, (to some parts sooner, to others later, but finally to all,) the signal of arousing men to burst the chains under which monkish ignorance and superstition had persuaded them to bind themselves, and to assume the blessings and security of self-government. All eyes are opened, or opening, to the rights of man. The general spread of the light of science has already laid open to every view the palpable truth, that the mass of mankind has not been born with saddles on their backs, nor a favored few booted and spurred, ready to ride them legitimately, by the grace of God.
-Thomas Jefferson, letter to Roger C. Weightman, June 24, 1826 (in the last letter he penned)

Christianity is the most perverted system that ever shone on man.
- Thomas Jefferson


"I have recently been examining all the known superstitions of the world,
and do not find in our particular superstition (Christianity) one redeeming feature.
They are all alike, founded on fables and mythology.
-Thomas Jefferson, Letter to Dr. Woods