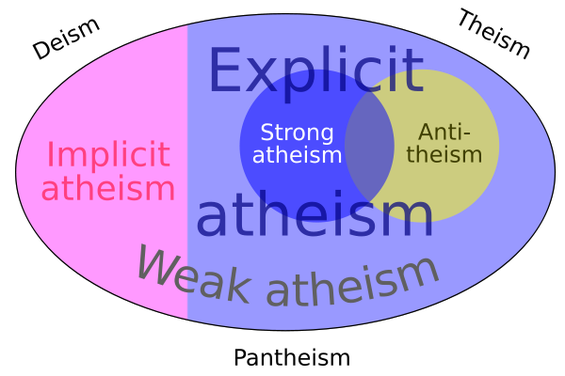 There are many ways to describe different types of atheism and some of these are explained below. However, there are many similarities, all of which are included in the blanket term "atheist." In all types of atheism, natural phenomena - such as the existence of life or the very existence of the universe - aren't attributed to gods. Instead, these are usually explained through science, without resort to supernatural explanations. Morality in atheism is also not based on religious precepts such as divine commandments or revelation through a holy text - many alternative philosophies exist to derive or explain morality, such as humanism.
Implicit atheism
Implicit atheism is simply the state of not believing in any gods, simply out of a lack of considering the question. All implicit atheists are weak or pragmatic atheists.

Weak atheism
Weak Atheism (sometimes thought of as "pragmatic atheism" or "negative atheism") describes the state of living as if no gods exist. It does not require an absolute statement of God's non-existence. The argument is based on the fact that as there is no evidence that gods, spatial teapots or fairies exist, we have no reason to believe in them. This argument could also be classified as extreme agnosticism, or "agnostic atheism" - as it is an acknowledgment of the lack of evidence but acting as if there were no gods. Pragmatic atheists however are frequently reluctant to make outright statements like "Gods (or fairies) do not exist",consequently many pragmatic atheists would argue that the burden of proof does not lie with them to provide evidence against the extraordinary concept that gods exist. They would argue that it is up to the supporters of various religions to provide evidence for the existence of their own deities, and that no argument is necessary on the atheist's part.

Strong atheism
Strong atheism (sometimes accredited with "theoretical atheism") makes an explicit statement against the existence of gods. Often, theoretical atheism specifically combats religious beliefs and other arguments for belief in some god (or gods), such as Pascal's Wager, and argument from design because religion is seen as a distraction from work needed to solve world problems such as poverty, disease and crime. Most theoretical atheists would disagree with pragmatic atheists about the inability to disprove the existence of gods. While gods (or fairies) cannot be absolutely proven not to exist, their existence could be provisionally described as extremely improbable.

Apatheism In short: they simply don't care. (Well, OK, they care enough to give themselves a name - so that people explicitly know what it is they don't care anything about. But that's it.)

Anti-theism
A disbelief in gods, the position that any belief in gods  is harmful or undesirable, either to the adherent or to society. As justification the antitheist will often point to the incompatibility of religion-based morality with modern humanistic values, or to the atrocities and bloodshed wrought by religion and by religious wars.
​