If The God Of The Bible Existed... 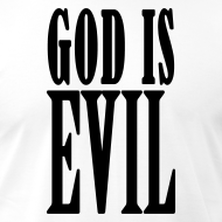 If somehow The God of the Jews, Christians, and Muslims somehow was proven to exist. I wouldn't worship him. I wouldn't want to worship a being who constantly needs to be worshiped 24/7, a being who is petty, jealous, unjust, vengeful, murderous, uncaring, and who can't even forgive a single person without the need of a blood sacrifice of any kind at all. He is sadistic, cruel, evil, arrogant, and ignorant of science.  He's always killing people in the old testament. (for some things that aren't even a crime.... Like ALMOST dropping the ark of the covenant.) I wouldn't worship him because of those reasons and many, many others. If he existed I would gladly burn for an eternity, then to worship someone like him forever in a boring afterlife praising him. Who claims to be love but has killed over 24 million in the bible alone, then there's the whole thing about Isaiah 45:7 which states "I form the light, and create darkness: I make peace, and create evil: I the LORD do all these things.". Meaning that he controls all. He controls your heart when you are in the middle of having a heart attack dying, to the guy getting shot by a bunch of people, tornadoes,  hurricanes, earthquakes, lightening strikes, and many many more things. So technically he has killed trillions.. Does that sound like a loving god? Plus there's the whole him creating hell thing, why would an all loving being would send his creations he loves to hell for no reason but because they don't worship him.
There is no need for worshiping that sadistic tyrant know as Yahweh.